Clean Energy Canada | Report: The Case for Municipal Participation in the Canadian Energy Strategy
May 30, 2013 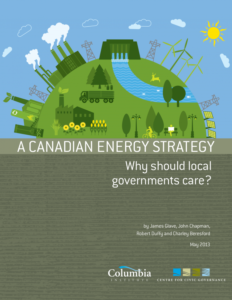 Local governments are as yet uninvolved with Canada’s developing national energy strategy, but have much to gain by engaging with their provincial counterparts now, while the plan is in its formative stages.

That’s the gist of A Canadian Energy Strategy: Why Local Governments Should Care, released by the Centre for Civic Governance and Columbia Institute and co-authored by yours truly.

The Centre released the report in advance of the annual Federation of Canadian Municipalities conference, which kicks off Friday in Vancouver.

Over the past year, Premier Alison Redford has been leading the development of a Canadian energy strategy through the Council of the Federation—an organization of provincial premiers. Such a plan would seek to guide the nation’s future energy development. It could also serve as a pathway to a low-carbon economy.

The report makes a case for why municipalities have a lot of skin in the energy game. For example, as international energy prices become increasingly volatile, many municipalities are seeking ways to reduce their dependence on foreign energy.

Just like the impacts of climate change, any Canadian energy strategy would ultimately hit the ground at the local-government level. Municipal governments are particularly well suited to driving progress towards energy efficiency, public transportation, and district energy.

A number of leading municipalities—including the City of North Vancouver, the City of Burnaby, and a variety of regional and rural governments—endorsed A New Energy Vision for Canada and Towards a Clean Energy Accord, both of which make the case that any Canadian energy strategy or framework must at its core reduce our fossil fuel dependence and transition the nation to a clean-energy economy.

We hope this new report serves as a useful tool for local governments, and we look forward to continued collaboration with municipal clean energy leaders.