Clean Energy Canada | Anybody can have a climate plan, but what makes for an effective one?
June 18, 2019 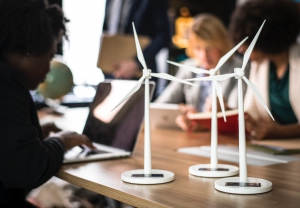 As the final sitting of this parliament draws to a close, the issue of climate change—now declared a climate emergency—has been getting a lot of attention. And with good reason. We needn’t even look beyond our borders to see that emergency is the right word to describe climate change. Two record-breaking years for wildfires—and already a bad start to 2019. Once-in-a-century floods that are no longer once in a century. Deadly heatwaves.

While once abstract to people, climate change has become part of our day-to-day lives over the last decade, and here in Canada, where we’re warming twice as fast as the global average, we are on the front lines.

With climate change polling among the top concerns of Canadians, it’s poised to be an issue of contentious debate in this fall’s election.

The Green Party and NDP have laid out their proposals, Mission Possible and Power to Change, respectively. The Conservative Party plan will be out Wednesday, and beyond running on its track record implementing its Clean Canada plan and the Pan-Canadian Framework on Clean Growth and Climate Change, undoubtedly the Liberal Party will have more to say on the matter.

Here are five questions that Canadians should ask when evaluating whether the party platforms provide the responsible, effective climate policies Canada needs:

Does it cut carbon pollution—in Canada—in line with our Paris target?

This may seem obvious, but it’s a question worth asking. As the federal government has acknowledged, even with all the federal and provincial climate change plans and policies in place, we aren’t yet on track to meet Canada’s Paris target of reducing emissions 30% below 2005 levels by 2030 (see the figure below, which shows we still have an emissions gap of 79Mt). And ideally, we want to be in a  position to fulfill the Paris Agreement’s ambition of adopting even more aggressive 2030 targets. Which of the party platforms will set us up to do so?

While some commentators seek to diminish Canada’s need to do its part, citing the fact that we contribute just 1.6% of global climate pollution, the fact is every tonne of pollution matters. Also, 1.6% isn’t small. Out of 195 countries, Canada is among the 10 biggest national polluters in the world, and with just 0.5% of the global population, 1.6% is considerably higher than our fair share. As the Ecofiscal Commission has noted, “we make an outsized contribution to the every top-10 nation matched Canada’s per-capita emissions, global emissions would more than double. If every nation in the world matched Canada’s per-capita emissions, global emissions would more than triple. Conversely, the average Canadian would have to slash their carbon footprint by 60% to square up to the average European.”

As for where the pollution reduction happens—domestically in Canada versus elsewhere—our first priority ought to be to clean up what we can directly control in our own backyard (and no, Canadian forests and other green spaces that store carbon are not enough to make Canada a ‘net-negative emitter’ such that we can ease off efforts to reduce pollution). While the Paris Agreement does include a yet-to-be-developed provision—under Article 6—for “internationally traded mitigation outcomes” (i.e. a mechanism that would allow one country to get credit for helping reduce emissions in another country) whether and how this accounting mechanism will work is not yet clear. As for the prospect of securing some form of emissions accounting “credit” for exporting low-carbon products from Canada? Unworkable—the global system for greenhouse gas pollution accounting, used by all 197 parties to the United Nations Framework Convention on Climate Change, simply doesn’t work that way. Nor does Article 6 offer a path for changing that.

Does it suggest a path forward for collaboration between the federal government and other levels of government?

As we’ve seen play out in the news cycle, provinces sometimes find themselves at odds with the federal government–or even other provinces–on matters of national importance like climate change. The reality is that all levels of government will play important roles in enabling Canadians and businesses to cut pollution.

While the federal, provincial, and territorial governments achieved, for a period, consensus around a Pan-Canadian Framework for Clean Growth and Climate Change, it was short-lived. A few provincial elections later and  we’re back to political fragmentation.

Who does what? How do we apportion the appropriate level of effort across Canada’s provinces or territories, or across different sectors and sources of pollution? The fact is, we’ve never arrived at a durable consensus on these questions. And there likely isn’t one right answer.

To date, some provinces have done far more than others to cut pollution. And they’ve done so for a variety of reasons, ranging from the availability of cleaner energy sources in their geographic location to the levels of public support for taking action. But then how does this relate back to Canada’s international commitment and how, as a country, we will reach our national targets? How do we share the effort?

Until Premier Ford weakened Ontario’s pollution reduction target to align with Canada’’s overall  target (30% below 2005 levels by 2030), Ontario was committed to delivering emission reductions of 37% below 1990 levels by 2030. In short, Ontario was doing more than required of it to contribute toward achieving the national target. This created space for other provinces, like Alberta for example, for whom that scale of reductions is more challenging. This was what we call cooperation. If Ontario is now doing less, presumably Alberta and Premier Kenney ought to do more? Or what?

(As an interesting aside, Premier Ford’s decision to weaken Ontario’s target opened up Canada’s gap to hitting its Paris target by 30 million tonnes of pollution, or roughly 40%—as illustrated in the earlier pie chart.)

Messy as it is, the next federal government is going to have to continue to grapple with how to forge a (durable) consensus among the provinces. Or if that’s impossible, how to bypass them, to a degree, and work directly with municipalities (cities, it would appear, are quite keen: 40 Canadian municipalities have declared states of climate emergency and many are actively working to reduce emissions—for example, following its declaration the Vancouver municipal council supported significant additional action, coined the “6 big moves”).

Does it include a variety of measures that enable—and hold accountable—everyone, from industry to households?

There is no silver bullet to solving climate change, no single policy or approach that can accomplish what we need across a country and economy like Canada’s. Ultimately, a variety of measures are required that enable, require, or “nudge” everyone—from industrial polluters to individual citizens—to adopt new practices, technologies, and behaviours that lower their contribution of carbon pollution. Pointing the finger solely at big polluters or solely at consumers misses the bigger picture and misunderstands the nature of the problem and the solution alike.

Experience has demonstrated that policies don’t always achieve what was expected, or come with unintended consequences. That’s to be expected. But in light of this reality, Canadians deserve transparency as to how things are working, and confidence that experts are advising on course corrections. As in the U.K. with its independent Committee on Climate Change, Canadians would benefit from the establishment of an arm’s-length expert panel to do just this. As Canada’s Climate Action Network has recommended, “iIt should be responsible for keeping the country on track to meet its 2030 commitments, and empowered to set 2050 targets based on climate science, in line with the goal of holding global warming to 1.5°C. Legislators, in turn, must be accountable for acting on the panel’s recommendations, and explaining to Canadians how they will do so.”

Recent experience in both Ontario and Alberta illustrates the harm associated with new governments that—rather than carefully evaluating and, where necessary, adjusting or improving policy—rollback effective policies altogether and campaign on ‘summers of repeal.’ Aside from the pollution implications, policy pendulums are accompanied by economic impacts—lost business and job layoffs among those delivering solutions and services that cut pollution—creating or perpetuating uncertainty for investors and individuals alike.

While the federal backstop price on carbon pollution has garnered the lion’s share of media and political attention, it is but one of dozens of federal policies and programs. These are effective policies that will make real progress towards reducing emissions and growing Canada’s clean economy. Will the next federal government build on these or scrap them only to start over from scratch? Under the next federal government, what will become of the zero-emission vehicle purchase incentives, or the clean fuel standard (which promises to deliver the largest emission reduction of any federal policy)? How will the next federal government navigate a Trump-led rollback of emission regulations for cars, SUVs, and trucks: follow suit or align with California and other states that plan to hold the line?

In addition to understanding what novel things Canada’s federal parties propose to do, it’s just as important that we understand what they might undo or change—along with their reasoning and the potential implications.

Does it acknowledge and capitalize on the co-benefits of climate action?

Since 2015, the federal government’s approach to climate change has been about more than just reducing carbon pollution. It has also focused on ensuring that Canadian companies remain competitive and prosperous, selling clean energy solutions and services at home and abroad, as the global economy shifts to cleaner energy and lower carbon. Similarly, for individuals and families, enhancing health, quality of life, and preserving (or improving) affordability have likewise been parallel objectives.

As our research has demonstrated, the Canadian clean energy sector is diverse, spanning a range of industries producing and using clean energy.

It’s also a sector that’s growing faster than the rest of the country’s economy (4.8% versus 3.6% annually between 2010 and 2017), attracting tens of billions of dollars in investment every year, and already accounts for 298,000 jobs in Canada—roughly equal to direct employment in the real estate sector.

Good climate change policy—and complementary policy supporting technological innovation, education and skills training, and fiscal programs—are helping build a better business environment for these companies. A pendulum swing away from these enabling policies could put these businesses and their employees at risk, and foreclose Canada’s opportunity to be globally competitive in the clean energy economy.

So beyond looking at policy approaches to cut pollution, how will federal parties build on this economic progress?

The political spotlight of an election campaign can be an awkward place for non-partisan policy wonks. But we are committed to doing what we always do: tracking the clean energy transition—in Canada and around the world—while sharing our views and analysis of how Canada can do our part to cut pollution and compete in the growing clean energy economy.