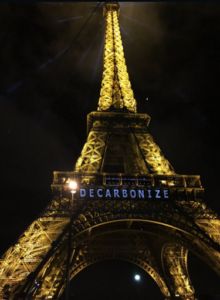 Here in Paris, there is a palpable sense of solidarity and excitement as the United Nations climate change conference gets underway. For those following from afar, here are a few highlights (including some tweets I’ve posted) from the past week.

A diverse delegation from Canada

On Monday, over 150 heads of state and government leaders spoke at the conference, including the newest addition to their ranks: Prime Minister Justin Trudeau. He spoke about the need for leadership on this issue, and with him in the delegation were premiers, First Nations leaders and party leaders. Canada presented a politically diverse but united front.

“We were elected by Canadians with a strong mandate on climate change,” notes PM @JustinTrudeau at #COP21. #cdnpoli

For a Canadian, climate conference halls haven’t felt like this for a decade. Canada’s new federal government, coupled with significant provincial leadership – especially from Alberta, with its big moves on climate change – mean our country is putting its best foot forward.

While clean energy does not appear prominently in the negotiation text, there is a strong set of global initiatives being discussed that will bring the world closer to a clean energy future.

Prime Minister Trudeau pledged $300 million toward clean technologies. Canada did so as part of a broad alliance called Mission Innovation — a “global partnership aimed at doubling government investment in clean energy innovation over five years, while encouraging private sector leadership in clean energy.” The initiative includes 20 countries, and more than 20 private-sector investors who will support clean energy technologies in those countries. Along with this innovation pledge, Canada reiterated its commitment to invest $20 billion in infrastructure over the next 10 years.

Canadians at UN climate summits just went from few pessimists to many optimists. 1st #COP21 meeting together of many

Looking at other global players, India launched a new solar power alliance with 122 nations, called the International Agency for Solar Policy and Application. It also aims to raise $2.5 trillion to fund this alliance over the next decade. The Africa Renewable Energy Initiative was also launched. It aims to build 300 gigawatts of solar capacity by 2030. For reference, current global capacity is 180 gigawatts, making this a huge move. And last but not least, the world’s 43 most vulnerable countries adopted a push for 100 per cent renewable energy by 2050 — leading with a commitment that many rich and developed nations have yet to make. “

A commitment to reduce emissions is most likely a commitment to strengthen economic growth.” Minister of Foreign Affairs, #CostaRica #COP21

The labour and climate event was, hands-down, Canada’s best so far at the Paris summit. Everyone in the room was interested in creating good jobs, creating an atmosphere of excitement. The Canadian Labour Congress and the Climate Action Network of Canada co-hosted a discussion event on Thursday night that focused on job creation and facilitating a transition for the coal, oil and gas sectors — all of which will gradually be phased out as the world moves to a clean energy economy.

We are aiming for 1 million climate jobs in 5 years, says @hassan_yussuff, head of @CanadianLabour. #COP21

There were oilsands workers, steelworkers, politicians and environmentalists in the room. As a Unifor representative said, “It’s our turn to say to workers: Thank you, and we’re here for you.” Canadians in the coal, oil and gas sector have helped build our country, and will need help during a transition so that no person is left behind.

Canadian labour/climate event is hands-down the best one yet at #COP21. Everyone here wants to build good jobs – now. And it’s exciting.

A strong agreement on climate action in Paris could accelerate the global transition to clean energy. But, as you may have noticed, that transition is already well underway. The excitement of this summit is focused on the agreement under negotiation — but it’s also a testament to the partnerships and tangible changes happening outside the conference centre’s walls.

Overall, “Very few jobs in coal. But there’s an enormous number of jobs that have been created in wind & solar.” – @MikeBloomberg #COP21