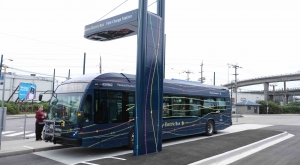 VICTORIA — Merran Smith, executive director at Clean Energy Canada, made this statement following Vancouver transit provider TransLink’s request for funding from the federal government for the electrification of its bus fleet:

“Electrifying transit is an unmissable opportunity to fight climate change. Transit already reduces personal car use, but electric transit turns a good solution into a great one, enabling millions of Canadians to get around pollution-free.

“In B.C., replacing a diesel bus with an electric version is equal to taking 26 cars off the road each year, based on Clean Energy Canada’s analysis. They also improve air quality and reduce noise pollution, leading to healthier, quieter communities.

“TransLink has a plan to electrify its entire bus fleet by 2040, but action needs to start now. Buses hitting the road today will still be driving a decade from now, and we cannot afford to lock in obsolete technology. Electric buses are smart investments. The dividends? Huge fuel savings, less pollution, healthier riders, new jobs and opportunity for Canada’s electric bus manufacturers.

“Last year, the governments of Canada, B.C. and Vancouver signed the Drive to Zero pledge, signalling a commitment to reduce pollution from commercial vehicles like buses. The prime minister’s mandate letter to the minister for infrastructure and housing also indicated that new federal transit investments should support zero-emission buses.

“TransLink is ready and willing, but they need federal support in the upcoming budget. Let’s not miss the bus on this one.”

Report |  Will Canada Miss the Bus?