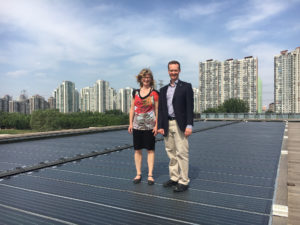 And I probably don’t need to tell you where it was built, but I will anyway. China, of course, with its monumental displays of spinning wind turbines and horizon-reaching fields of solar panels.

But China is not just leading on the demand side. The world’s second-largest economy is also home to many of its top clean energy suppliers.

When it comes to making solar panels, China dominates with six of the 10 biggest suppliers in the world—including the top two. (A quick patriotic aside: Canadian Solar is number three and based in Guelph, Ontario.)

For China, the market at home is huge—but so is the market abroad. The vast majority of solar panels going to India, for example, come from China.

As for wind turbines, the third-biggest-supplier award goes to China’s Goldwind (which we visit in the video above, along with Chinese solar company Hanergy, maker of cutting-edge thin film solar panels).

Goldwind was previously number one, but global competition is heating up. If it’s any consolation, China’s Sewind took the top spot—by a mile—for most offshore wind power supplied globally last year.

And no one can compete with China for this record: last week, the country completed construction on the world’s largest (if not only) solar farm shaped like a giant panda.