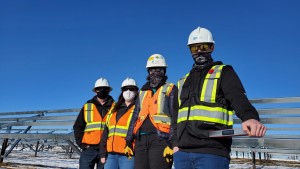 VANCOUVER — As jobs in fossil fuels decline amid a shifting global landscape, rapid growth in Canada’s clean energy sector will more than make up the difference.

So finds a new modelling report, The New Reality, from Clean Energy Canada and Navius Research, which forecasts changes in jobs, GDP and investment in Canadian energy between 2020 and 2030.

Canada’s clean energy sector already employs 430,500 people—more than the entire real estate sector—and by 2030, that number is projected to grow almost 50% to 639,200 under the federal government’s new climate plan. At the same time, Canada’s fossil fuel sector will see a 9% drop in employment. In terms of raw numbers, the 208,700 new clean energy jobs added by 2030 far exceed the 125,800 lost in fossil fuels.

Canada’s clean energy sector is made up of companies and jobs that help reduce carbon pollution, whether by generating clean energy, helping move it, reducing energy consumption, or making low-carbon technologies. It includes a wide range of jobs, from the worker assembling battery packs for new electric buses to the insulator retrofitting homes so they waste less energy.

Clean energy growth is particularly pronounced in Canada’s biggest oil-producing regions. While currently behind provinces like B.C. and Quebec, Alberta is set to see 71,700 jobs in its clean energy sector by 2030, a 164% increase over 2020—the greatest increase of any Canadian province. Meanwhile, Saskatchewan will also see clean energy jobs double.

The International Energy Agency recently concluded that if the world is to reach net-zero emissions by 2050, no new oil and gas exploration and development will be needed going forward.

The good news is that Canada’s clean energy sector is positioned to thrive, with many innovative companies already exporting their clean goods and services.

As the report concludes, oil and gas may have dominated Canada’s energy past, but it’s Canada’s clean energy sector that will define its new reality.