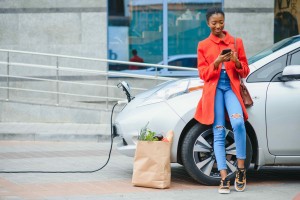 This survey is part of a four-part series. View the other three posts here, here and here.

In the latest round of survey work by Clean Energy Canada and Abacus Data, two out of three people in Canada (67%) believe that President Biden’s election will help make electric vehicles a growth industry and that Canada should do everything we can to attract electric vehicle manufacturing here. Only 33% think the market won’t change very quickly and that we shouldn’t put much effort in this area.

In terms of the expected time frame for this transition, just over half (52%) of those interviewed think this will happen in 15 years or less.

The interest in electric vehicles is high across the country. Albertans show lower levels of interest, but even in that province, just under half say they are leaning or likely to buy an electric vehicle next. Conservative voters show a similar pattern.

But perhaps the most powerful indicator of forward momentum is the influence of generational attitudes. Only one in five of those under 30 would be inclined to buy a combustion engine vehicle, and only one in three of those 30 to 44.

While younger generations show much stronger levels of inclination to purchase, that is not to say that the market for electric vehicles isn’t strong among older people too. Among those 60 or older, 52% indicate they are more likely than not to buy an electric vehicle next.

“Ten years ago, there were less than 20,000 electric cars on the road. Last year, the number passed seven million. Demand for e-vehicles is stronger than it has ever been and as technologies improve, range anxiety decreases with longer battery life and more charging stations, the pace of change looks ready to accelerate.  Younger people want zero emission vehicles to be the norm and don’t feel like buying one is an experiment that might or might not work out—for them it is what they expect from manufacturers and what manufacturer’s are promising to offer. Alongside this most Canadians expect government to help our auto sector evolve in this direction so that Canadian workers can be fully engaged in this remarkable and rapid transformation.”

“Canadians are excited about electric vehicles. And for good reason: EVs save drivers thousands of dollars a year on fuel and maintenance while also cutting pollution and improving air quality. But more than that, as EVs hit roads around the world in record numbers, they also offer an opportunity to revitalize Canada’s auto sector. It’s clear that Canadians see an electric future—and that they want their government to ensure we stay up to speed.”

The survey was conducted with 1,419 Canadian adults from November 26 to December 1, 2020. A random sample of panelists were invited to complete the survey from a set of partner panels based on the Lucid exchange platform. These partners are typically double opt-in survey panels, blended to manage out potential skews in the data from a single source.