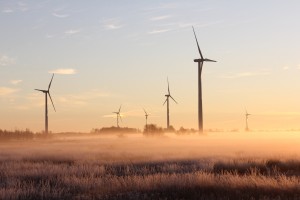 In the latest round of survey work by Clean Energy Canada and Abacus Data, we found three out of four Canadians believe countries that set higher emissions reduction ambitions will be more successful competitors in the global economy compared to those who set lower ambitions.

While some Canadians see economic risk in the transition away from oil and gas, a majority believe there is more opportunity than risk.

For the world in general, 56% say a shift away from higher carbon energy has more opportunity than risk (44%), and the numbers are virtually identical when the question is asked about the dynamic for Canada in particular. (55%-45%).

When it comes to some specific policies that could help Canada reduce emissions and reach the new targets that the federal government has set, the large majority of people support or are willing to go along with a series of three different ideas that were tested.

No more than 13% oppose any of these measures.

“Canadians are probably best described as ambitious pragmatists—on most issues and in particular when it comes to the changes required to combat climate change. People are aware that change could pose economic dislocation but they believe that lagging this shift would be a worse choice for Canada.

When the theory of change is translated into some specific policy choices that could help catalyze a shift in energy use, the vast majority are inclined to want to be open and supportive of changes in line with a spirit that there is a need to change and more opportunity than risk.”

“People understand the world is changing and that Canada needs to change with it. And encouragingly, this survey shows that when you ask them about specific policy solutions to move us forward, they still remain broadly supportive. The measures we tested are the ones Clean Energy Canada believes the federal government should prioritize to help hit Canada’s new climate target. Not only will these actions make a real dent in our emissions, but it’s clear they’re also well supported by Canadians.”

The survey was conducted with 1,500 Canadian adults from May 7 to May 12, 2021. A random sample of panelists were invited to complete the survey from a set of partner panels based on the Lucid exchange platform. These partners are typically double opt-in survey panels, blended to manage out potential skews in the data from a single source.

The margin of error for a comparable probability-based random sample of the same size is +/- 2.1%, 19 times out of 20.