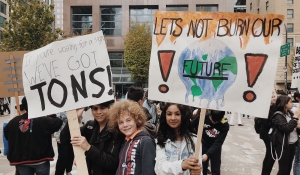 87% would allow their children to march

In the wake of several recent marches for climate action and with mass marches approaching on Friday (September 27), including one in Montreal with climate activist Greta Thunberg, the latest Abacus Data-Clean Energy Canada poll reveals:

“Greta Thunberg
has helped create a new and compelling form of advocacy on the climate issue by
drawing sharp attention to intergenerational responsibility. A sense of moral
obligation is felt by a very broad majority of Canadians, and many people feel
more compelled to support urgent climate action because of the power of this
youth movement.”

“It’s
our kids who will be most impacted by climate change. And they are making it
clear today how the leaders of tomorrow will look back on us. Canada has one of
the largest carbon footprints of any country in the world. We must now act
responsibly considering our direct contribution to climate change, our position
of influence on the world stage, and our capacity to develop and deliver clean
energy solutions.”

The survey was conducted online using a random sample of 1,929 panelists invited to complete the survey from a set of partner panels based on the Lucid exchange platform. These partners are typically double opt-in survey panels, blended to manage out potential skews in the data from a single source.

The margin of error for a comparable probability-based random sample of the same size is +/- %, 19 times out of 20.  The data were weighted according to census data to ensure that the sample matched Canada’s population according to age, gender, educational attainment, and region. Totals may not add up to 100 due to rounding.