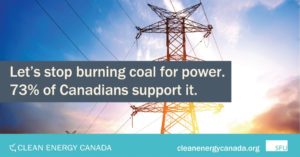 In a new report released this morning, the Fraser Institute paints a simplistic portrait of Ontario’s coal phaseout—the single largest greenhouse gas reduction initiative in North America to date. Evaluating the coal phaseout solely on the basis of particulate matter and air quality misses the bigger picture—that burning coal for energy contributes to climate change and switching to cleaner forms of electricity is a significant climate solution.

From that perspective, phasing out coal is a real-world example of successful climate action, and an essential tool to cut carbon pollution nationally as other jurisdictions follow suit.

Ontario’s coal phaseout successfully reduced emissions, is just one of many unique factors contributing to the province’s electricity prices, and is a climate solution that finds support across Canada.

In 2007, coal accounted for 25 per cent of Ontario’s electricity generation. As of 2014, that number was zero. Ontario’s coal phaseout reduced greenhouse gas emissions in the province by approximately 17 per cent—the equivalent of taking seven million cars off the road.

Canada, meanwhile, has announced a plan that will see a national phaseout of traditional coal-fired power by 2030. A recent Clean Energy Canada report found that a national coal phaseout would be one of the most effective policies for reducing carbon pollution as we work toward meeting Canada’s national 2030 climate target.

To avoid the disastrous cost overruns incurred by Ontario’s nuclear plants in the ’80s and ’90s, the province transferred the costs of building new natural gas, wind and solar plants to the private sector in exchange for long-term contracts. As a result, Ontario has a reliable mix of power but more than is currently needed—which it must pay for regardless.

Adding to that is the rising costs of inflation, which between 2000 and 2010 accounted for almost half the price increase for the average residential consumer. Today’s electricity bills also factor in the Global Adjustment, a surcharge that covers costs associated with the coal phaseout, refurbishing nuclear plants, building new generating capacity, and maintaining existing power plants. A breakdown of the global adjustment shows that nuclear costs accounted for 42 per cent, gas-powered generation 26 per cent, and new renewable generation capacity (including hydro) 17 per cent.

Former Ontario premier Dalton McGuinty was elected in 2003 in part because of his promise to reduce smog days and phase out coal. Thirteen years later, public support for such initiatives remains strong. Polling in fall 2016 found the vast majority of Canadians (73 per cent) want to see the country’s remaining coal-fired power plants shut down, even if it means accelerating the timeline to 2030 from 2043.

Ontario’s coal phaseout successfully reduced emissions, is just one of many unique factors contributing to the province’s electricity prices, and is a climate solution that finds support across Canada. Rather than dismissing Ontario’s progress based on too-narrow criteria, let’s build on Ontario’s experience as the rest of Canada shifts to cleaner electricity and lays the groundwork for clean growth in the decades ahead.