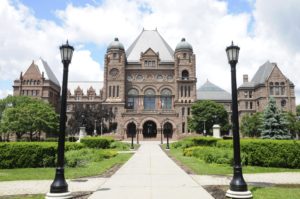 TORONTO — The Ontario Government released its 2016 Budget today, along with a regulation to implement a cap-and-trade system on greenhouse gas emissions. The system will operate under the Western Climate Initiative with California and Quebec.

The budget also contained $155 million in initiatives to reduce emissions through support for the clean technology sector, with program details to be provided over the coming months.

“In launching its cap and trade system, Ontario joins other jurisdictions representing nearly half of global GDP in putting a price on carbon pollution. It’s a key component of climate leadership, and the province deserves congratulations.

“Ontario has done its homework—it has worked to deliver a reasonable cap-and-trade policy that will deliver accountability and transparency. It’s a credible and robust policy that will stand up over the long-term.

“If you want to support clean energy technology, the vital first step is to put a price on carbon. Serious money—a third of a trillion dollars—was invested globally in renewable energy last year.  Momentum is on the side of jurisdictions that get in the game, and as a leader in renewable electricity, Ontario is growing companies that can seize this opportunity.”