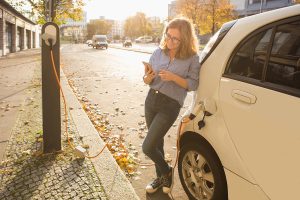 VANCOUVER — A growing number of British Columbians want electric cars, but there’s one big problem: most B.C. dealerships still don’t have a single one on the lot.

As local supply struggles to meet demand, British Columbians often can’t find EVs to test drive, while others are left waiting months to get their hands on a new model.

This summer, Clean Energy Canada called all 322 dealerships in B.C. that qualify for the province’s EV rebate program and found that only 40% of them have electric cars on their lots available to purchase.

Most dealerships said the wait time to get an electric car would be three months to a year—with some citing wait times of up to 18 months. Fewer than one in five of them could refer us to an alternative dealership with available EVs.

The B.C. government is currently considering a policy that would require automakers to sell more electric cars in the province—like they have in California and Quebec.

Coming off a weekend that saw record-high gas prices in Metro Vancouver, it’s clear that many more British Columbians will be looking to go electric. Such a policy would help automakers keep up with demand in B.C.

“British Columbians are excited about electric cars—and so were many of the salespeople we spoke to. This is about choice. It’s about cutting both fuel bills and carbon pollution. Fortunately, our provincial government can solve this with a proven solution.”

“No one wants to wait a year to get an electric car—often without the option of even test-driving it first. Maybe that person waits, maybe they get a gas-fuelled car instead. At a time when we need to do more than ever to cut pollution and enhance affordability in this province, it’s an unacceptable situation for British Columbians who want to go electric.”