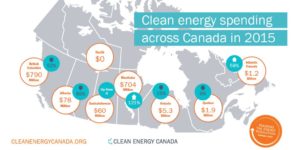 Canada saw 15 per cent less spent on new clean energy development in 2015 than in the previous year, and future growth in this sector will depend largely on policies being developed provincially and federally, according to Clean Energy Canada’s latest annual assessment.

A Pivotal Time for Clean Energy finds the slow-down in Canada’s clean energy sector is out of step with investment trends in other leading countries. However, at just over $10 billion CAD in clean energy spending, 2015 was still the second-best year for new clean energy development in Canada’s history.

The nearly $2 billion drop in spending since 2014 can be attributed largely to two factors:

Getting clean energy development, job creation and growth back on track will require new or improved policies across the country, the report states. Among the most promising developments are Saskatchewan and Alberta’s plans to double and triple their respective renewable electricity capacity by 2030. Federal efforts to establish a nation-wide approach to carbon pricing and climate action could also have a significant impact in the years ahead.

“We’re living in a new era of political resolve to tackle climate change. As Alberta and Saskatchewan add more clean power to their grids, and as Ottawa announces new measures that support electrification, spending on clean energy will likely grow again in the years ahead.”