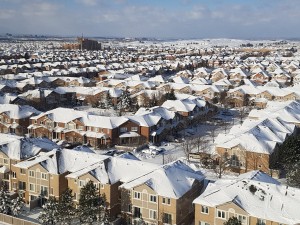 Clean Energy Canada is a clean energy think tank at the Morris J. Wosk Centre for Dialogue at Simon Fraser University. Through media briefs, we aim to provide useful factual and contextual information related to Canada’s clean energy transition. Please use this as a resource, and let us know if there are any topics that you would like to see for future media briefs.

The war in Ukraine and the associated energy crisis have squeezed household energy bills around the world. In response, many jurisdictions—particularly in the EU—are working to diversify energy supply away from fossil fuels toward cleaner alternatives such as wind, solar and hydrogen.

Evidence suggests that the energy transition is not only necessary to avoid the worst impacts of climate change, but also to address the energy insecurity and price volatility being felt by consumers around the world. Indeed, a number of studies suggest that Canadians will be spending less on energy in a net-zero world.

This media brief summarizes available research on the potential impacts of the energy transition on household energy spending in Canada.

1. The International Energy Agency’s World Energy Outlook 2021 found that, under current global policies, average household energy bills in advanced economies would decline between 2020 and 2050. Under a scenario where governments introduce policies to reach net zero by 2050, bills would decline even further. While electricity bills are set to be higher in a net-zero world due to increased use of electricity, cost savings from energy efficiency and the lack of fossil-fuel-related expenditure (like gasoline for cars and natural gas for heating) mean that overall household energy bills are projected to be lower. More ambitious climate policies would reduce the financial impact of fossil fuel price shocks on households, such as the recent one in Europe.

2. Similarly, 2022’s World Energy Outlook indicates that a net-zero scenario will require less consumer spending on energy in 2030 than in a scenario where only current policies are retained, and less overall than was spent in 2021. The average cost per unit of electricity in a net zero 2050 is set to be 10% below 2021 levels.

3. The Canadian Climate Institute’s report on Canada’s Net-Zero Future, using modelling by Navius research, examined the proportion of household income spent on energy services (including home heating, electricity, and transportation). The report found that households across all income groups are likely to spend less in 2050 compared to 2020. This is due to three reasons:

4. When the impacts of climate change are considered, affordability is negatively impacted, emphasizing the importance of climate action and clean energy to bring down economy-wide costs over the coming decades. Another study from the Canadian Climate Institute found that inaction on climate will have significant impacts on affordability. According to the report, Canada’s GDP could fall by 12% by the end of the century while household incomes could fall as much as 18% compared to a “stable-climate” scenario. The study projects that lower income households would be the most adversely affected.

5. A study from researchers at Oxford University found that switching from fossil fuels to renewables could save the world between US$5 trillion and US$12 trillion by 2050, emphasizing that “a rapid green energy transition is likely to be beneficial, even if climate change were not a problem.” The study argues, specifically, that there are minimal trade-offs associated with the energy transition and that “a greener, healthier, and safer global energy system is also likely to be cheaper.” When the social cost of carbon is included in the analysis (i.e. the costs to our economy in terms of damage from climate change per unit of carbon emitted), the savings are even higher, in the range of US$31 trillion to US$775 trillion depending on the assumed social cost of carbon and discount rate.

7. Many climate solutions involve technologies that will save Canadians money overall, even if they cost more upfront. This is particularly relevant for transportation and buildings.