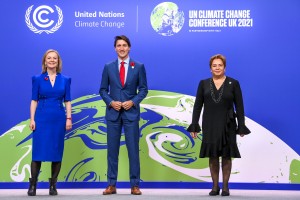 This media brief summarizes some of the key topics associated with the 26th Conference of the Parties held in Glasgow, U.K., until November 12, with a particular focus on relevancy for Canada.

Overview: The 2015 Paris Agreement includes a requirement for countries to submit more ambitious Nationally Determined Contributions (greenhouse gas emissions targets) every five years. Because COP26 has been delayed by a year, many countries—including Canada—announced their new five-year targets earlier this year.

More than 100 countries have announced new reduction targets (including China and India) ahead of the COP26 deadline, while others have not (including Australia and Russia). However, a recent UN Climate report suggests that the current climate targets are still projected to result in a 16% increase in global emissions by 2030 compared to 2010, which would lead to a temperature rise of about 2.7°C by the end of the century. However, the report does not include recent commitments made last week.

Relevance for Canada: Canada is one of several countries to increase its target.

Overview:  A major discussion point of COP26 is expected to be climate financing for developing countries. The Paris Agreement indicates that wealthier nations should pay an increasing amount to less wealthy countries to assist with climate-related investments like flood defense from sea level rise, clean energy development, or the use of energy efficiency retrofits.

At COP15 in Copenhagen in 2009, richer countries pledged that they would collectively provide US$100 billion (CA$123 billion) per year by 2020. Estimates suggest that goal has not been met, and the target likely won’t be reached until 2023. There are also concerns about the quality of climate finance: how much funding is actually new, a reliance on loans instead of grants, and a lack of clarity about what projects are eligible.

The funding commitments are made on the basis that richer countries’ economic development has, in large part, been enabled by the use of fossil fuels, and therefore these countries should take some responsibility for addressing climate change in less developed nations.

Relevance for Canada: Canada is one of the countries expected to provide climate financing for developing countries.

Overview: Article 6 of the Paris Agreement sets up the guidelines for an international carbon market, where emission reductions can be traded across countries. It contains three mechanisms for trading these kinds of offset credits, two of which are market-based. These are:

Article 6 is the only article in the Paris Agreement that has yet to be operationalized. While significant progress was made at COP25 in Madrid, there is still no consensus on how the system should work. Negotiators hope that talks at COP26 could lead to a resolution.

Relevance for Canada: The federal government is considering whether and how it might use ITMOs toward its climate targets by complementing domestic emission reduction efforts with reductions taking place in other countries. However, there are challenges around the use of offsets in carbon reduction, and there is contentionaround whether Canada could gain emissions credit from exporting liquefied natural gas.

Overview: COP26 is calling on countries to commit to ensuring all new car and van sales are for zero-emission vehicles by 2035 in advanced markets and 2040 in all other markets. Currently, 16 national and subnational governments accounting for 14% of global passenger vehicle sales have committed to phasing out gas cars by 2040 or earlier.

As part of the global Drive to Zero campaign, a group of countries led by the Netherlands, including Canada, are also urging leading nations to jointly pursue a global memorandum of understanding to accelerate the manufacturing and adoption of zero-emission medium- and heavy-duty vehicles (such as commercial trucks and buses). This global agreement would aim for 100% zero-emission medium- and heavy-duty vehicle sales between 2040 and 2050.