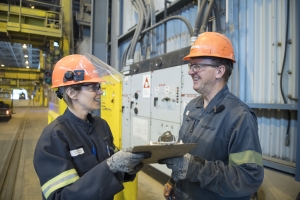 Governments around the world are increasingly using public procurement – the system governments use to make purchasing decisions – as a tool to simultaneously tackle climate change and support jobs.

From Canada to the U.S. to the European Union (EU), governments are using “Buy Clean” policies to incentivize the use of lower-carbon construction materials in infrastructure projects such as roads, bridges and buildings. As Canadian policy-makers explore the concept further, Clean Energy Canada has released a new report that dives into how leading U.S. jurisdictions have developed and used Buy Clean – and what Canada can learn from them.

The policy’s growing popularity is deserved. Buy Clean has significant emissions-reduction potential. Government procurement is responsible for 15% of the world’s annual carbon emissions. Harnessing this purchasing power could reap significant emissions reductions, even if restricted to just a handful of carbon-intensive materials such as steel and concrete.

Beyond reducing pollution, a Buy Clean strategy can also improve domestic manufacturing competitiveness and create additional jobs and economic benefits. Canadian industries typically produce lower-carbon goods compared to their international competitors, in large part thanks to an electricity grid that is 83% emission-free. Canadian steel and aluminum, for example, are among the world’s cleanest and could be even cleaner with the right policies and investments in place. As the global economy moves toward net-zero emissions, demand for these products is growing.

Buy Clean also has the added advantage of being a potential pathway to exempt Canadian products from “Buy American” rules by demonstrating that Canada is aligned with the U.S. approach on climate and procurement.

The government of Canada has committed to developing a Buy Clean strategy, acting on a 2021 election campaign promise and including it in the December 2021 mandate letters for three federal ministers. It’s now time to make this commitment a reality.

Adopting such a strategy will help Canada meet its climate targets while simultaneously rewarding businesses for past investments to reduce emissions. Various levels of government hold substantial purchasing power, annually buying about $5 billion worth of steel, cement, concrete and other building materials.

In fact, more than 30% of all steel, cement and concrete purchased in Canada is by the public sector. Mandating lower-carbon requirements for such a large proportion of the market improves the value proposition of cleaner goods. That, in turn, incentivizes investment in cleaner technologies and over time helps lower production costs, making low-carbon products increasingly competitive and available to wider domestic and global markets.

Given the positives, it is perhaps not surprising that the Buy Clean concept is supported by industry, labour and environmental organizations. In fact, several industry associations including the cement, steel, aluminum and forestry sectors have joined together with groups representing labour and the environment to form an industry alliance advocating for a Canadian Buy Clean strategy to be in place by 2023.

What’s more, the Canadian public is on board. Recent polling found close to three-quarters of Canadians show some support for low-carbon purchasing requirements for public infrastructure projects even when this leads to slightly higher total costs.

But not all Buy Clean policies are created equal, so there are steps that should be taken to ensure their success. Fortunately, we can learn from U.S. experiences.

Led by California starting in 2017, at least 18 U.S. states and local governments have developed policies or legislation to address the embodied carbon emissions of materials, creating a unique policy laboratory. More recently, the U.S. government has begun mobilizing its significant spending power in support of Buy Clean goals. Although many of these efforts are in their early stages, there are still important lessons to be learned for governments, including Canada’s, that want to reduce emissions associated with procurement.

The interview findings can be distilled down to six key takeaways:

1. Start simple and increase ambition over time: focus on a few high-impact materials and put in place policies that can be improved on and added to over time.

2. Engage stakeholders in policy decisions: consult early and widely to create buy-in and tap into expertise within industry and government.

3. Collect enough data to make informed decisions: greater transparency about the carbon footprint of materials is important, but don’t wait for perfect data before acting.

4. Use a mix of caps and incentives: governments have several tools – such as setting embodied carbon caps or providing incentives to reward low-carbon materials in the bidding process—to reduce emissions and incentivize low-carbon innovation.

5. Ensure there is a policy champion: Buy Clean requires co-ordination across multiple federal departments and levels of government, as well as policy champions to make it happen.

6. Include Buy Clean as part of a broader industrial strategy: governments must design an approach that includes investments to decarbonize industry and changes to trade rules, while growing demand for cleaner products.

Canada’s own Buy Clean development is a multi-year process, but several immediate steps can be taken.

Second, it should partner with provinces, municipalities and the private sector to fund demonstration projects across the country that showcase low-carbon materials and build comfort and expertise to enable their uptake.

Finally, this strategy needs a federal policy champion to inject urgency and leadership into the process. Along with our partners in industry and labour, we are urging the government to create a federal Buy Clean task force with the authority to co-ordinate policy among the numerous departments, agencies and stakeholders with a role to play.

This post was co-authored by Oliver Sheldrick and originally appeared in the Institute for Research on Public Policy’s digital magazine, Policy Options.