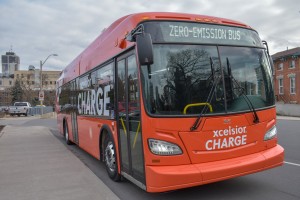 TORONTO — Sarah Petrevan, policy director at Clean Energy Canada, made the following statement regarding the Prime Minister’s announcement of a $10-billion infrastructure plan:

“At a time when some of the world’s biggest banks and financial institutions are putting climate at the forefront of their recovery efforts, it’s vital that Canada does the same. The Infrastructure Bank’s new plan will help build a more competitive and resilient economy—creating jobs for Canadians while tackling climate change.

“In particular, we welcome:

“The federal government said during last week’s Throne Speech that it would make climate the ‘cornerstone’ of its recovery. Today’s announcement sends a signal that it intends to act on this promise.”

Report | Catching the Bus: How smart policy can accelerate electric buses across Canada

Op-ed | What should public transit look like post-pandemic? Clean, comfy and electric

Media Brief | Clean stimulus: the research behind it and the countries adopting it