Clean Energy Canada | A little-known policy that will build an industry and fight climate change
November 24, 2017 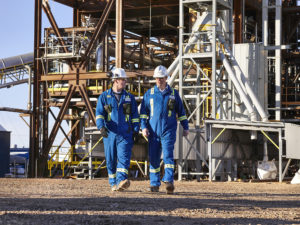 If asked what the federal government is doing to cut carbon pollution, most Canadians would likely point to the policy they’ve heard the most about: carbon pricing. But there’s another tool in the pan-Canadian framework on clean growth and climate change that will cut far more carbon pollution than federal carbon pricing, and you probably haven’t heard of it.

It’s called the Clean Fuel Standard and, while still in the design phase, it aims to cut 30 million tonnes of CO2 a year by 2030. That’s equal to taking more than seven million cars off the road, making it the biggest carbon-pollution-cutting policy the federal government has planned.

The Clean Fuel Standard targets not only transportation fuels, such as gasoline and diesel, but also those used in buildings and industry, such as natural gas. It would require fuel suppliers to reduce the carbon intensity (the amount of carbon pollution released for every unit of fuel consumed) of their product, while offering flexibility in how they choose to do so. A gasoline provider could blend ethanol into their fuel to make it less carbon-intensive, for instance – something Canadian fuel providers already do.

The Clean Fuel Standard is critical to Canada’s fight against climate change. What’s more, it will create thousands of jobs for Canadians to help fuel our economy, cleanly.

But what does the Clean Fuel Standard mean for jobs, the economy and Canadian households? Clean Energy Canada partnered with Navius Research to model the potential economic impacts of the policy, and we uncovered some encouraging results.

Clean fuel use in Canada could more than triple by 2030 with a Clean Fuel Standard, growing our clean fuel sector by $ a year. It could also create up to 31,000 jobs for skilled workers to build, operate and supply new clean-facilities. Indeed, Canada’s biofuel industry, the biggest benefactor, could roughly double in size – thanks to this single policy.

Montreal-based Enerkem, which employs roughly 200 people, is exactly the kind of company that would find new growth opportunities with a Clean Fuel Standard in place. Enerkem’s Edmonton facility converts a portion of the city’s waste into low-carbon ethanol (yes, it turns garbage into fuel) and that fuel is then sold to British Columbia. Why? Because Canada’s westernmost province has had a Clean Fuel Standard since 2010 – and has seen clean fuel use double.

Study after study has reached the same conclusion: for Canada to achieve its 2030 and 2050 climate targets, we must switch to cleaner fuels. But this switch will take time, so we need to start now. The fact that it takes time is why the policy was created in the first place. In California and B.C., the Clean Fuel Standard provides a long-term, consistent signal to reduce the carbon intensity of transportation fuels. Companies can take the long view and invest wisely because they know what to expect for years to come.

Shell is already preparing for this kind of change on a global scale. Last summer, Shell struck a deal with Edmonton’s SBI BioEnergy, a biofuels company, and last month purchased an electric-car-charging firm in Europe.

It’s early days for Canada’s Clean Fuel Standard, and it remains to be seen how politicians, industry and Canadians will respond. Some may cite cost as a concern, but for Canadian households, that cost equates to a single cup of coffee a month. The policy would ramp up gradually, costing $5 per month for a typical Canadian household by 2030, or just $2 for an energy-conscious one.

We also modelled a number of existing and proposed federal and provincial policies aimed at helping Canadians save energy. As a result of these policies, typical Canadian households will save $17 a month by 2030, and energy-conscious households a whopping $82 – and that’s with a Clean Fuel Standard in place. Canadians, in short, will be saving on energy overall, while Canada will be able to follow through on the promise it made to the world as part of the Paris Agreement.

The federal government is expected to release a draft framework of the Clean Fuel Standard in the months ahead, with plans to design the regulation in 2018. We look forward to its implementation. The Clean Fuel Standard is critical to Canada’s fight against climate change. What’s more, it will create thousands of jobs for Canadians to help fuel our economy, cleanly.

This article was co-authored by senior analyst Jeremy Moorhouse and originally appeared in The Globe and Mail.