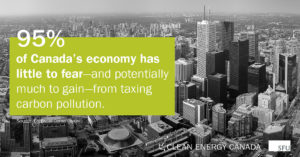 VICTORIA—Dan Woynillowicz, policy director at Clean Energy Canada, made the following statement in response to the federal government’s release of draft legislative proposals for the federal carbon pricing system:

“The federal government has laid out a comprehensive approach to ensuring carbon pollution is priced across Canada, while also protecting industrial competitiveness.

“This legislation means Canada will join the ranks of other nations using carbon pricing as an efficient, effective way to encourage innovation and investment by consumers and companies.

“The global economy is shifting toward markets that reward low-carbon solutions, and by proactively driving industrial innovation toward this end, Canada is positioning local companies to compete in this new reality.

“In Canada, many provinces have already implemented and benefited from putting a price on carbon pollution—doing so in ways that meet their unique needs. After all, Canada is a country of vast and varied regions, which is why the federal government is offering flexibility—though not without the certainty of a federal backstop.”