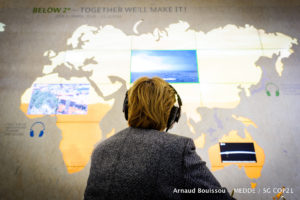 We’re now past the halfway point of the international climate negotiations in Paris. There’s much optimism that a strong agreement will be reached, and clean energy is adding to that sense of momentum.

A strong agreement coming out of Paris would set the world on a trajectory to cut emissions and limit the impacts of climate change. At the same time, it would send strong market signals that investing in the deployment of clean energy solutions is a wise business decision.

We’re watching for three key elements as nations draw closer to an agreement in Paris.

First, the agreement needs to set a goal of limiting global warming to 1.5 degrees Celsius. Catherine McKenna, Canada’s minister of environment and climate change, has supported that goal, which in turn will define how much carbon pollution can be released and how our energy system must evolve.

Clean energy is influencing the negotiations for the first time.

Why 1.5 degrees instead of the commonly cited two-degree objective? In a word: science. When world leaders committed to limiting warming to two degrees at the Copenhagen negotiations five years ago, it was a largely a political decision. The world has already warmed by 0.8 degrees and we’re seeing troubling impacts. Beyond 1.5 degrees, we get into dangerous territory.

Second, the Paris agreement needs to articulate a strong process where countries are legally required to monitor their emissions performance. Countries should also be required to update and improve their emissions-cutting goals for every five years.

This kind of reporting will provide consistency, accountability and transparency amongst nations. It’s also a necessity because the current national targets aren’t enough: all nations will have to continuously improve on them, and be accountable for doing so.

Third, the agreement should set a long-term goal of decarbonizing the global economy by 2050. You may recall that G7 leaders committed to this goal when they met last June — except they set the target date as 2100 instead of 2050, due to resistance from Japan and Canada’s former prime minister.

Why the Paris negotiations are different

Many seasoned observers have been talking about how different the atmosphere is at these negotiations. What’s fascinating is how clean energy — both the recent ramp-up in its deployment, and its prospects for future growth — is influencing the negotiations for the first time.

As we’ve documented in our Tracking the Clean Energy Revolution reports, clean energy has gone “from boutique to big.” In the past five years, it has attracted more than $1 trillion in investment. Renewable power investments are outpacing those in fossil-fuel power, while rapidly developing countries like India and China have embraced renewable energy. Heading into Paris, this bolstered the confidence of governments and investors alike: clean energy can deliver results, and it’s only going to get cheaper.

The negotiations are also being shaped by the commitment of resources to support clean energy deployment in developing countries. That includes the just-announced African Renewable Energy Initiative, which aims to build out 300 gigawatts of new renewable energy by 2030.

That’s no small ambition. A number of countries have stepped up with financial commitments to make it happen, including Canada’s pledge of $150 million (which is part of a larger contribution to the Green Climate Fund). This kind of financial support plays a crucial political role in forging a strong climate agreement with global partners.

The negotiations are also being shaped by the commitment of resources to support clean energy deployment in developing countries.

Last but not least, businesses have been playing an active role at these negotiations. Some of the world’s largest companies — be they on the energy supply side, like France’s Total, or on the demand side like IKEA and Google — have decided that clean energy has passed the threshold of inevitability. They’re adopting it because they believe it’s going to be deployed. The only question now is how quickly.

If everything goes according to plan, a final draft of the agreement will be completed Wednesday and accepted by Friday. Of course, it’s possible that negotiators will go into overtime, as has happened at past summits. But if we do see a final agreement by Friday, it will be in no small part because of the momentum that clean energy solutions created heading into these negotiations.

Written by Merran Smith & Zoë Caron from the UN Climate Summit in Paris.