Deep in the Heart of Texas: A Wind Energy Maverick Takes an Alberta Field Trip

To put it mildly, it’s not easy to shift something as deeply entrenched as an electricity system. You need a willing public, committed entrepreneurs, and supportive policy, which helps create the needed business case.

But above all, you need elected leaders willing to get the ball rolling, and stick with it. Which is what they had in Texas, back in the early 1990s, according to Michael Osborne.

“You’ve got to give credit to the leadership of politicians, of both stripes,” said the cofounder of the Texas Renewable Energy Association at “America’s Clean Energy Maverick: How and Why Texas Grabbed the Renewable Energy Bull by the Horns,” a sold-out lunch event that we hosted last week in Calgary.

As outlined in the presentation below, Osborne shared the story of the politics and policy that have made Texas a renewable energy leader.

Both Sides of the Aisle

More than two decades ago it was Governor Ann Richards, a Democrat, who first invited renewable energy developers to the table. She determined renewable energy had a role to play in the state and established the Sustainable Energy Development Council to advise on making it happen.

But Texas was just getting started: the next governor (and future President), Republican George W. Bush continued to redefine Texas as not just an “oil and gas state” but an “energy state,” and when he deregulated the electricity market and put in place a Renewable Portfolio Standard.

Bush’s successor, and the current Governor, Rick Perry—another Republican—built on the momentum by creating Competitive Renewable Energy Zones, a system of transmission lines designed to bring the state’s renewable energy bounty from all corners of the state to Houston, Dallas, and other cities.

And this leadership has paid off. As the chart below demonstrates, Texas now leads the United States in wind power with 12,354MW of installed capacity, and the state has blasted through the targets set in the Renewable Portfolio Standard by a country mile (5,880 MW by 2015; with a goal of 10,000 MW by 2025). As Osborne noted, this growth hasn’t just meant a cleaner power grid, it has created 12,000 jobs in the wind sector and 4,000 jobs in the solar sector—and Texas shows no signs of slowing down.Figure 1: Growth in renewable electricity capacity (2000-2014) 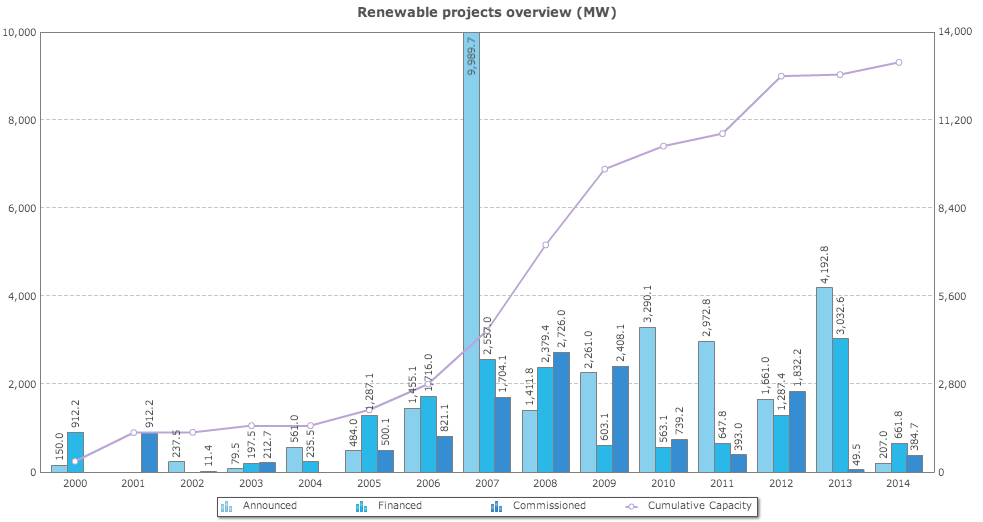 “Solar is the New Wind”

The most recent Electric Reliability Council of Texas’s (ERCOT) Long Term System Assessment, a biennial report submitted to the Texas Legislature on “the need for increased transmission and generation capacity throughout the state of Texas,” found that—alongside natural gas—about 17,000 MWs of wind and 10,000 MW of solar power would be built in future years.

As Osborne said, “solar is the new wind”, and with plummeting prices it seems likely that photovoltaics will continue to surpass wind in global energy investment, as the sector did for the first time in 2013.

From the Calgary luncheon to the government briefings we had in Edmonton, Michael Osborne proved open and insightful about his state’s accomplishments, and his perspective on how Alberta could similarly reap the benefits of its renewable energy bounty. (Hint: Obsorne believes a Texas-style Renewable Portfolio Standard might just do the trick).

As Alberta continues to develop its Alternative and Renewable Energy Framework, hopefully it can draw some lessons from Texas and answer—with action—the question so simply posed by Calgary Herald columnist Stephen Ewart: Where is Alberta’s support for renewable energy?

“America’s Clean Energy Maverick: How and Why Texas Grabbed the Renewable Energy Bull by the Horns,” by Michael Osborne from Clean Energy Canada
Print this article