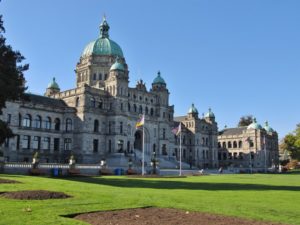 “Climate change is a global issue, and the Premier has made it clear that B.C. will remain a climate action leader,” Minister of Finance Michael de Jong said this week in his budget speech.

Just don’t look to the 2016 budget to back up that aspiration—there’s little “climate action” to speak of.

It’s a concern because B.C.’s carbon pollution problem is getting worse, not better, and it’s eroding our credibility as a climate leader. Between 2011 and 2013, British Columbia’s carbon pollution increased by 1.5 MT CO2eq—equivalent to adding 400,000 cars to the road. Over the same period, Quebec’s emissions dropped by roughly the same amount as B.C.’s rose (1.6 MT CO2eq) while Ontario’s emissions dropped by more than twice that amount (4 MT CO2eq). Our peers are pulling ahead, which means if B.C. wants to remain a climate leader it’s going to have to keep prioritizing climate action.

It’s a concern because B.C.’s carbon pollution problem is getting worse, not better, and it’s eroding our credibility as a climate leader.

B.C. knows what to do to turn this situation around, but the province hasn’t said how it plans to follow through—and this budget shows no major actions are planned for the next fiscal year.

In November, the premier’s Climate Leadership Team recommended a mix of 32 policies that would cut carbon pollution while growing the economy, and the government is currently seeking public input as it considers those recommendations. However, there’s a disconnect in acknowledging that climate leadership requires new actions to curb B.C. carbon pollution problem, without committing to act.

To reclaim the title as a climate action leader, British Columbia will need to announce (and budget for) a mix of new actions, including:

Back to this year’s budget—there is one bright spot for climate: the government has renewed support for British Columbians who buy less-polluting vehicles, and is putting some funds toward building infrastructure to support the transition to electric transportation. B.C.’s clean vehicle program provides a rebate of up to $6,000 for each electric or hydrogen-powered vehicle sold, up to $6 million in total. Another $7 million will go towards soon-to-be-announced clean energy projects, electric vehicle charging stations, support to replace oil-burning heating systems with cleaner ones, and other projects that fall under the province’s Innovative Clean Energy Fund.

There is one bright spot for climate: the government has renewed support for British Columbians who buy less-polluting vehicles.

Also worth noting in this budget is the government’s promise to establish a commission on tax competitiveness. The commission will evaluate B.C.’s current tax system with an eye to whether it’s keeping pace with changes in the economy. How to increase B.C.’s carbon tax while maintaining competitiveness would fit nicely in this discussion.

Being a climate leader is good for British Columbia. It attracts investment, makes our economy more efficient, and supports sustainable jobs in a variety of sectors and regions throughout the province. Analysis we released last fall found that B.C.’s economy would continue to grow as the province drives down carbon pollution—and we would see an additional $5 billion in renewable energy investment.

Each new delay calls B.C.’s credibility as a climate leader into question. In the global race to develop clean energy and technology, a reputation for climate leadership is currency.

Let’s not waste ours.