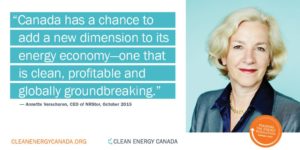 Clean Energy Canada | China is buying clean energy technology. Canada should sell it to them
October 17, 2016

What happens when the world’s largest economy decides it wants to be a leader in tackling climate change?

We’re about to find out.

For years, the only headlines about China and climate change were about the fast-developing country’s intransigence at international climate change negotiations, or the rate at which it was building carbon-spewing coal-fired power plants.

In tandem with the United States, China—the world’s largest carbon polluter—has already ratified the climate change agreement reached in Paris at the end of 2015. And by July 2017, China plans to launch a cap-and-trade system not unlike that between Ontario, Quebec and California. Ultimately, China anticipates spending US$6.6 trillion to deliver on its climate change commitment.

“The market opportunity for Canadian energy and expertise to China is by no means restricted to oil and gas.”

This creates a huge opportunity for Canada to make exporting climate change solutions—clean energy and other energy efficient, low-carbon technologies and services related to water, agriculture and urbanization—a priority in its trade with China.

No doubt part of China’s confidence in its climate change commitments stems from its success in deploying huge amounts of renewable electricity. As documented in A Year for the Record Books, US$325 billion was invested in renewable power in 2015, and fully one-third of that investment—US$110 billion—was in China. That investment delivered China 10 times more new renewable power capacity than natural gas-fired power, and 3 times more than coal-fired power.

And there’s no sign that China is going to ease off in its pursuit of clean, renewable power to feed its voracious energy demand. Instead, demand will only increase, as China pursues a goal of putting 5 million “new energy” vehicles—which includes electric vehicles, plug-in hybrids and fuel-cell vehicles—on the road by 2020. With a rapidly growing middle class clamouring for personal vehicles and cities already choked by smog, emission-free vehicles are getting a big push from the Chinese government. Clearly, there’s opportunity for the central Canadian transportation industry to benefit.

All this translates into one big takeaway for Canadian policy-makers and business leaders: the market opportunity for Canadian energy and expertise to China is by no means restricted to oil or liquefied natural gas. In fact, the market prospects for those fossil fuels may not live up to current expectations. Meantime, providing clean energy technology and service solutions has great potential.

As the world’s largest producer of wind and solar electricity, China is expected to raise its power storage capacity 10-fold by 2020. It just so happens that Canada is home to a number of innovative power storage companies, such as NRStor Inc. The reality is, for a Canadian company to scale-up, it has to play outside Canada’s borders. As former Home Depot Canada and now NRStor Inc. CEO Annette Verschuren has noted, “Canada has a chance to add a new dimension to its energy economy—one that is clean, profitable and globally groundbreaking.”

So it’s good news that Prime Minister Justin Trudeau has made it a priority to reinvigorate Canada’s relationship with China, as evidenced from his visit to China to his recent hosting of Chinese Premier Li Keqiang in Ottawa. While many Canadians have some misgivings about our relationship with China, supporting Chinese efforts to reduce carbon pollution is, I imagine, something that most Canadians would encourage.

People often assume that Canadian companies will struggle to gain a foothold in China, but the evidence doesn’t bear that out. Canadian Solar—the second largest solar module manufacturer in the world—has manufacturing plants and solar projects in China. Hydrogenics Corp., a developer and manufacturer of hydrogen generation and fuel cell products, has signed supply agreements with several Chinese electric vehicle integrators to bring its fuel cell and fuelling station technology to China. And earlier this year, Canada’s Global Acceleration Partners—a Canadian investment company—teamed up with the Shanghai Advanced Research Institute and the Chinese Academy of Sciences to form the Institute for Clean Technology, which aims to commercialize energy and environment solutions related to lowering carbon emissions or converting them into a productive feedstock.

Now Canada must make exporting clean energy technologies and services a trade priority—in China and beyond. From the United States’ Renewable Energy and Energy Efficiency Export Initiative to approaches taken by Germany, Israel and the Nordic countries, there are models we can adapt and adopt for Canada. Canadian companies need to better understand where the market opportunities in China lie, and get solid advice and support to capitalize upon them. The federal government can lend a hand.

As Prime Minister Trudeau said while in China, “We know that a stronger and deeper relationship with China is essential if we are to achieve our own objectives.” Increased trade with China in clean energy technologies and services is an opportunity to do just that—and it helps satisfy Canada’s economic and environmental objectives.

This op-ed was co-written by Nicholas Parker, a Toronto-based investor and entrepreneur.