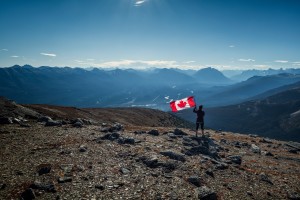 This survey is part of a four-part series. View the other three posts here, here and here.

In the latest round of survey work by Clean Energy Canada and Abacus Data, two out of three people in Canada (68%) think Canadians are currently seen in the rest of the world as people “who are determined to help combat climate change” while only 32% think our image is of “people who lack the will to change and protect the planet.” Fully 83% would like us to be seen as “determined to help combat climate change,” while 17% would prefer we be seen as unwilling to act.

Today, 77% of Canadians think our country is seen as “highly dependent on oil and gas” while 76% would like to see a change and would prefer Canada be seen as “an economy that runs on renewable energy.”

Finally, the vast majority of Canadians support the idea of a national effort to promote sustainably made Canadian industrial products around the world, to ensure that Canadian workers benefit from a shift to a lower carbon economy.”

These results are part of a national survey that has revealed a sweeping conviction among Canadians that the world is shifting towards decarbonization and a very broad conviction that Canada should compete to win investment and jobs in that context.

On each of these items noted in this release opinion is highly consistent across generations, regions and regardless of political affiliation. Conservative voters and Albertans are more split on whether they want Canada seen as an economy that runs on renewable energy, but a majority in both cases would prefer that image for the country.  Fully 81% in Alberta and 77% of Conservative voters want Canadians to be seen as people who are determined to help combat climate change.

“Shifting to a cleaner economy is broadly seen as desirable and inevitable and once-deep resistance among Conservative voters and Albertans seems to be dissipating. Across Canada, the desire is for our country to be seen as a place that does it’s share to fight climate change, produces products to high standards of sustainability and Canadians also like the idea of marketing our products to the world with these credentials front and centre. This debate has shifted rapidly and a climate plan is increasingly viewed as central to an economic plan for the future.”

“A year into this new decade, climate action is the clear Canadian consensus, full stop. It’s a moral responsibility Canadians believe we have, absolutely, but it also underpins the economy Canadians want and believe we need to compete abroad. And it’s the image Canadians want to see of themselves when they look in the mirror—or when they imagine the world looking at us.”

The survey was conducted with 1,419 Canadian adults from November 26 to December 1, 2020. A random sample of panelists were invited to complete the survey from a set of partner panels based on the Lucid exchange platform. These partners are typically double opt-in survey panels, blended to manage out potential skews in the data from a single source.