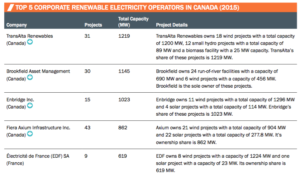 EDMONTON — The Government of Alberta announced today a firm target to generate 30 per cent of the province’s electricity from renewable sources such as wind, hydro and solar by 2030. This coincides with the government’s commitment to phase out coal-fired power by 2030.

“Last year Alberta saw investment in renewable power drop 89 per cent to just $78 million—but that figure will rise into the billions in the years ahead, which is great news for the economy. Producing nearly one-third of Alberta’s electricity from renewable sources creates tremendous opportunity for investment and jobs, especially in rural Alberta.”

“Alberta is home to numerous energy companies leading the way, including two of the largest renewable power operators in Canada: TransAlta and Enbridge. The province has the engineering capacity and renewable energy potential to deliver on this target—creating new jobs and revenue streams in the process.

“No one sector can, or should be expected to, replace the jobs and wealth we have come to rely upon from the oil and gas sector. But every little bit helps, and cleaning up Alberta’s electricity system with abundant, reliable and affordable renewable power can help put people back to work.”