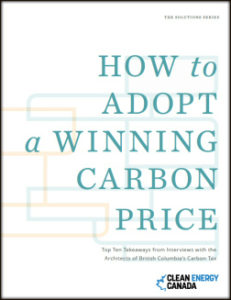 British Columbia’s carbon tax—first introduced seven years ago today—has proven itself an economic and environmental winner. And as a made-in-Canada climate success story, it offers valuable lessons to others looking to put a price on carbon pollution.

That’s why we produced How To Adopt a Winning Carbon Price: Top 10 Takeaways From the Architects of British Columbia’s Carbon Tax—a new compendium of insider tips for policy makers who may be considering a carbon pricing program.

To create the document, we conducted a dozen confidential and candid interviews with the original architects of British Columbia’s carbon tax, including then-premier Gordon Campbell and his finance minister, as well as other experts.

Our research confirmed that smart climate leadership isn’t as politically dangerous as some claim. The evidence from B.C. shows that carbon pricing can be a winner at the ballot box, too.

Though focused on B.C.’s carbon tax, the paper offers useful insights to governments considering other kinds of carbon pricing, such as a cap and trade system. In the coming months, our team will publish a companion report offering a similar inside look at the development of Quebec’s cap and trade system.

The signals we’re seeing from Ontario, China, and U.S. states like Washington suggest carbon pricing is on its way to being the “new normal.”

Indeed, British Columbia’s approach is now recognized around the world, and the policy developers we spoke to were very proud of the legacy they created.